A new project entitled “The impact of UPF1 ATP mimetics on the mutant immunopeptidome” will be launched at the University of Gdańsk on September 1, 2021. The project leader is professor Theodore Hupp from the International Centre for Cancer Vaccine Science. Professor Hupp is one of the winners of the competition OPUS 20 financed by the National Science Centre (NCN). Granted funding for the project is PLN 3098035, of which PLN 1664355 for the University of Gdańsk. The project is carried out in cooperation with the Gdańsk University of Technology. Co-authors are dr inż. Umesh Kalathiya from the ICCVS and prof. Sławomir Makowiec from the Gdańsk University of Technology. The project will focus on understanding the mechanism and physiological functions of the NMD pathway which can have the potential for treating certain genetic diseases and cancer. 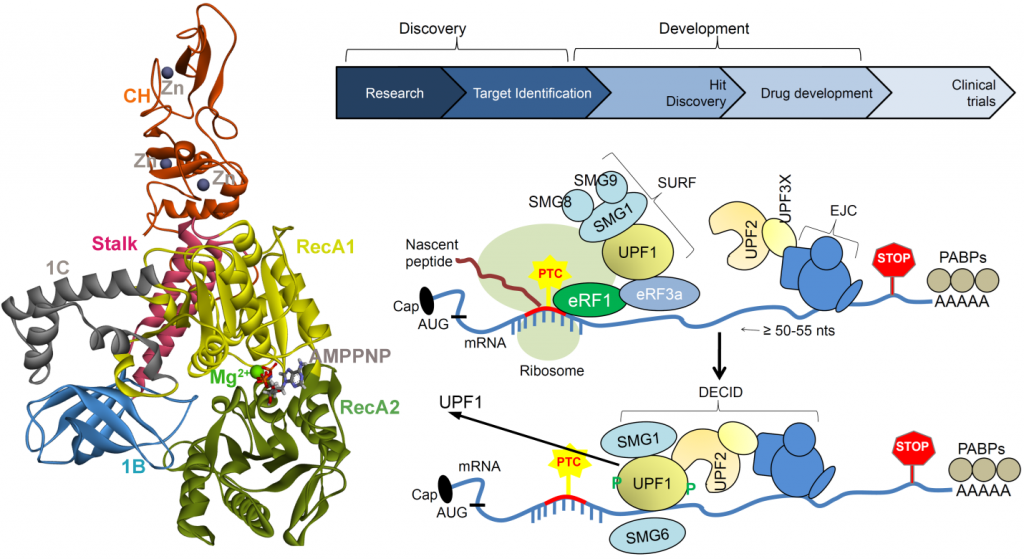 ders many dominant mutations recessive by degrading transcripts encoding abnormal proteins with dominant activities. By this mechanism, NMD can exacerbate the phenotypes of many disorders by preventing the synthesis of truncated protein products with normal functions. Therefore, there is an intense interest in identifying NMD inhibitors (small-molecule) for treating certain diseases where the protein products of the corresponding nonsense mRNAs are fully or partially functional. Small-molecule inhibitors that can modulate NMD activity offer critical tools for understanding the mechanism and physiological functions of the NMD pathway, and they also have the potential for treating certain genetic diseases and cancer.

The NMD pathway, including UPF1, UPF2, UPF3a, and UPF3b, is over-produced in human cancers and can stimulate immune escape thus the NMD pathway is a recognized drug target for cancer therapy, but there are no current clinical tools to validate this for use in human populations. Our approach to the treatment of diseases caused by premature termination codon mutations is the inhibition of nonsense-mediated mRNA decay, which features UPF1. We will focus on the core functions of UPF1 to find new small molecule ATP mimetics that can be used as chemical tools to define the function and drugability of the pathway. Inhibiting hUPF1 with a small molecule, which will generate translation readthrough, can create neoantigens by virtue of the amino acid which is added at a stop codon. In this sense, NMD (UPF1) inhibitors stimulate the tumour cell to make its own vaccine. Most cancer vaccines in clinical trials exploit mutated proteins; these vaccines include peptide products, viral assembly of genomic encoded mutated peptides, or mRNA synthesis that encodes mutated peptides in a patient specific manner. However, our approach to stimulate PTC readthrough with a small molecule, that drives the tumour to synthesize its own novel mutated peptides, is itself a novel approach for developing cancer vaccines. A set of appropriate methodologies will be applied to ensure that robust data will be obtained and the results from the previous stage substantially influencing the next phase. Furthermore, the investigation of the interaction network of UPF (UPF1, UPF2, UPF3a, and UPF3b) genes by experimental assays within the project could bring novel insights into the assembly of this multi-protein complex and other inhibitors of NMD that could impact on cancer vaccinology.