Use of comparative oncology approach to dissect the PD-1 intrinsic signalling in osteosarcoma. Can dog be the key for next generation osteosarcoma treatments?  – this is the title of the successful project application submitted by ICCVS PhD student Katarzyna Dziubek to the National Science Centre (NCN).

Funding has been granted within the NCN Preludium 21 Programme – a scheme dedicated to support pre-doctoral researchers. Katarzyna Dziubek has been awarded 210 000 PLN for her research to be conducted over the next 3 years. As pre-doctoral project PI, she will work under the scientific supervision of prof. Natalia Marek-Trzonkowska and with help of dr Jakub Faktor from ICCVS. In vivo part of the project will be conducted in collaboration with dr Maciej Parys from The Roslin Institute.

The focus of the project is set on osteosarcoma – the most common type of bone cancer, which mainly affects children and young adults. Relatively low prevalence of the disease in humans and difficulty in running clinical trials in children, resulted in no significant therapeutic advancement over the last decades. Novel treatment approaches are currently hampered by lack of spontaneous models of the disease.

Recent studies have shown that cancer cells not only express PD-L1 but also PD-1 and proposed the tumour intrinsic PD-1 expression as a cause for cancer patient relapse after immune checkpoint blockade. Scarce reports on this type of signalling provided contradictory results – says Katarzyna Dziubek. Strikingly, our recent results revealed that cancer PD-1 intrinsic signalling in human osteosarcoma may be of great importance in cancer cells invasion and metastasis, suggesting that it may be a mechanism of osteosarcoma resistance to immunotherapy – she adds.

However, to overcome the limited number of osteosarcoma patients, there is a need to find a spontaneous model of osteosarcoma in order to study the disease. Interestingly, dogs develop osteosarcoma 10 times more frequently compared to humans. Moreover, many reports already demonstrated pathological, morphological and genetic similarities of the disease in both species. Also, dogs have a fully functional immune system, live in a similar environment to humans and any research progress will be beneficial for both species, what makes them a perfect model to study osteosarcoma.

The aim of this project is to use canine osteosarcoma cell lines to determine the role of PD-1 intrinsic signalling in canine osteosarcoma and to establish how closely it resembles human disease. Revealing resistance mechanisms to immunotherapy may help to identify new druggable targets in the future in both species.

The Preludium 21 call has received in total 2.163 applications and 258 projects have been funded. Katarzyna Dziubek’s project is the first Preludium project conducted at ICCVS, and the second successful application won by Katarzyna Dziubek – she has previously also received the START Award of the Foundation of Polish Science in 2021. 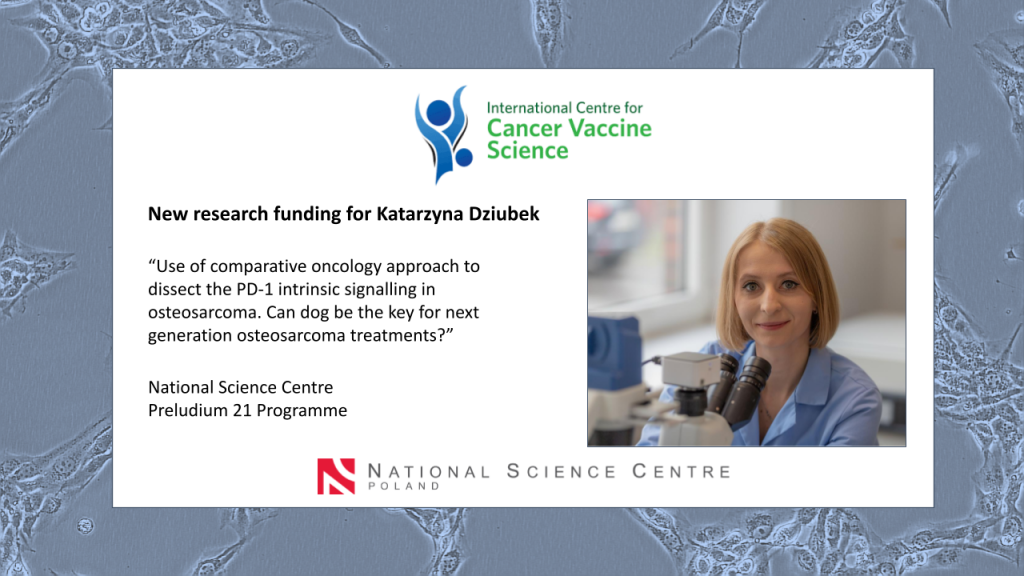