We are pleased to announce that our research article entitled “DIA-MS proteome analysis of formalin-fixed paraffin-embedded glioblastoma tissues” has been published (https://www.sciencedirect.com/science/article/pii/S0003267022002665).

The new wave of oncology studies across many applications, including its use in molecular classification, oncogenic pathway analysis, drug, and biomarker discovery, and the unraveling of therapy response and resistance mechanisms. In recent years, the analytical performances of Mass spectrometry (MS)-based proteomics technologies have significantly improved. Currently, it is possible to quantify protein levels in samples using different methodologies. The publication presents, quantitative method called data-independent acquisition MS (DIA-MS) to detect and quantify proteins in glioblastoma formalin-fixed paraffin-embedded (FFPE) tissue microdissections. Owing to their long-term stability, inexpensive storage, and rich clinical data, FFPE tissues are indeed the most valuable resource for protein biomarker research. However, challenges with protein extraction from these specimens are extant, and there is a need for workflows that are simple, robust, and easily implementable. Our work shows the benefit of critically assessing chemical buffers before establishing the most effective workflow for proteome analysis of FFPE tissues. We thus established a precise DIA-MS approach, which enabled the detection of over 1700 proteins and quantified more than 1400 proteins. Further, we demonstrate effective quantification of glioblastoma-relevant and immune-related proteins, allowing more profound insight into biological systems. We revealed a patient-specific proteome, and this approach holds great potential for routinizing protein quantification in FFPE tissue samples.

We are pleased to announce that our review entitled “Interferon Gamma, MHC Class I Regulation and Immunotherapy” has been published (https://doi.org/10.33696/Signaling.3.065). The Major histocompatibility complex class I (MHC-I) molecules are crucial elements for tumor-associated antigen recognition and elimination of cancer cells. In this review, we discuss the regulation of MHC-I, the implications of interferon-gamma (IFNγ) signaling enhancing the expression of MHC-I, and their association with immunotherapy. Many patients diagnosed with various types of cancer have inhibited the IFNγ signaling pathway and present anomalies in the MHC-I expression. In this regard, the review additionally explores how deficiencies associated with IFNγ signaling affect MHC-I expression in tumor cells. Furthermore, we stress the importance of gaining molecular knowledge to improve tumor stratification and find complementary IFNγ effectors that could activate the MHC-I expression. Altogether, it will help predict which tumors can recover expression of MHC-I and respond to immunotherapy.

Since the beginning of the SARS-CoV2 pandemic the ICCVS team has been focused on understanding of the virus recognition mechanisms, immune response and new drug discovery.Recently, prof. Natalia Marek- Trzonkowska, MSCs Łukasz Arcimowicz and VMD Ines Papak from Cancer Immunology group of ICCVS have published a paper on this topic in collaboration with Department of Oncology and Radiotherapy, Department of Infectious Diseases and Department of Pneumonology of the Medical University of Gdańsk.

The publication presents a clinical and immunologic aspects of an immunocompromised lymphoma patient with persistent SARS-CoV-2 viremia successfully treated with a combination of remdesivir and convalescent plasma three months after primary infection. The unique feature of the study is a deep immune profiling of the patient with the focus on the clonal expansion of Th and Tc cells, and the activation status of T and NK cells. Despite of B cell depletion the patient showed robust proliferation and activation of TCR Vβ2 CD8+ T-cell clones and CD16+CD56- natural killer cells during resolution of the infection. The report indicates that SARS-CoV-2 patients with B cell deficiency may achieve an effective clinical response when NK and antigen-specific Tc-cell activation is induced. This is the first study demonstrating TCR-specific oligoclonal response of T cells in B cell deficient patient who recovered from COVID19. 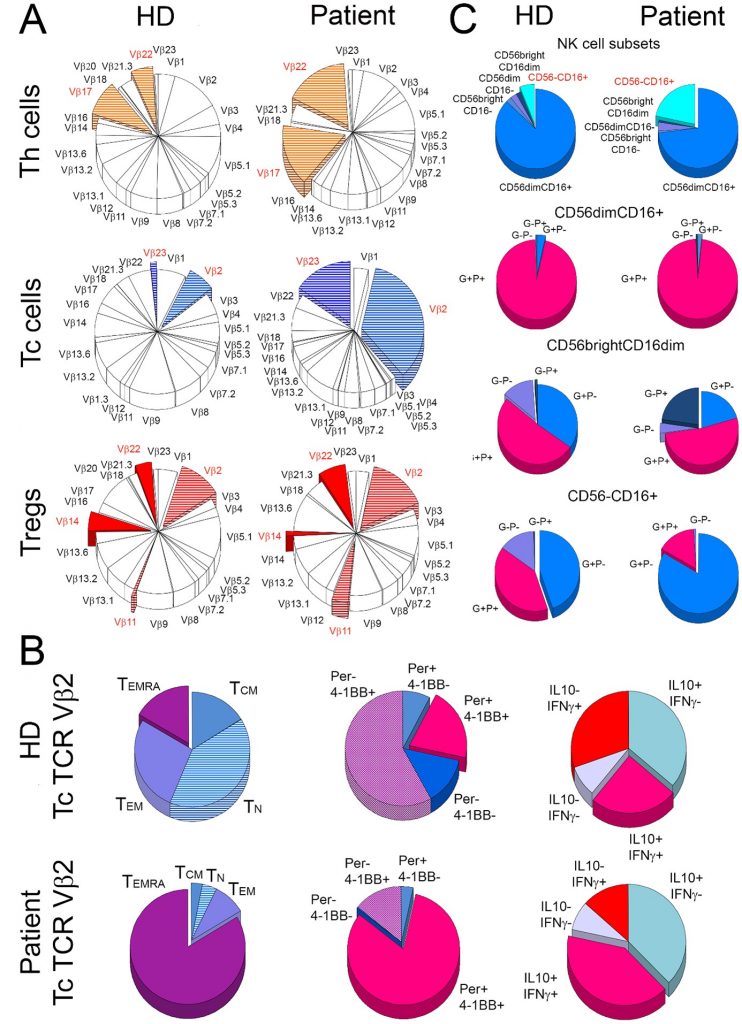 Oligoclonal expansion and activation of T cells in the B-cell depleted patient. The figure depicts (A) mean frequency distribution of 24 T-cell receptor (TCR) Vβ families of T cells in three healthy donors (HD) and the patient (Patient). The most striking differences between the patient and the control donors are marked with colours. (B) shows characteristics of cytotoxic T (Tc) cells from TCR Vβ2 family in healthy donors (HD) and the patient (Patient). For both the patient and the control group, the frequency of naive (TN), central memory (TCM), effector memory (TEM), and effector memory Tc cells that re-expressed CD45RA (TEMRA) were compared (1st column). In addition, TCR Vβ2 Tc cells were compared for the proportions of perforin (Per) and 4-1BB (activation marker) positive (+) and negative (-) cells (2nd column) and for the distribution of cells positive (+) and negative (-) for IL-10 and IFN- (3rd column). The right panel (C) shows the distribution of five subsets of natural killer (NK) cells (1st row) and then cells positive (+) and negative (-) for perforin (P) and granzyme A (G) within CD56dimCD16+ (2nd row), CD56brightCD16dim (3rd row), and CD56-CD16+ (4th row) NK-cell subsets in the patient and healthy donors.

The TAP transporters constitute functionally key components of the antigen presentation pathway since they link the cytosolic pool of peptides with the PLC and the ER-resident MHC-I molecules. The TAP1-TAP2 complex transports antigenic peptide substrates into the endoplasmic reticulum (ER). In ER, the peptides are further processed and loaded 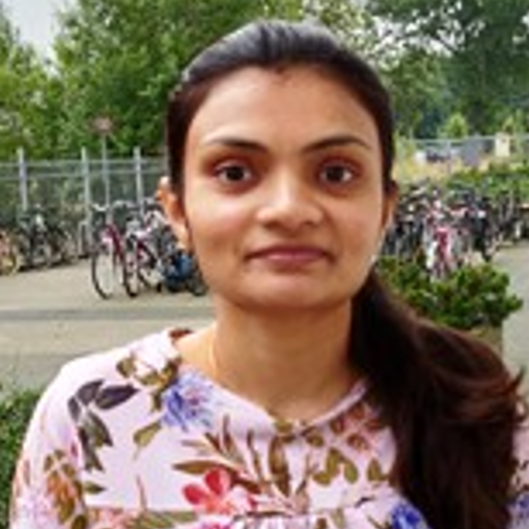 on the major histocompatibility class (MHC) I molecules by the peptide loading complex (PLC). The TAP transporters are linked with the PLC; a target for cancers and viral immune evasion. But the mechanisms whereby the cancer-derived mutations in TAP1-TAP2 or viral factors targeting the PLC, interfere peptide transport are only emerging.

This recent study published by M. Padariya et al. describes that transit of peptides through TAP can take place via two different channels (4 or 8 helices) depending on peptide length and sequence. Molecular dynamics and binding affinity predictions of peptide-transporters demonstrated that smaller peptides (8–10 mers; e.g. AAGIGILTV, SIINFEKL) can transport quickly through the transport tunnel compared to longer peptides (15-mer; e.g. ENPVVHFFKNIVTPR). In line with a regulated and selective peptide transport by TAPs, the immunopeptidome upon IFN-γ treatment in melanoma cells induced the shorter length (9-mer) peptide presentation over MHC-I that exhibit a relatively weak binding affinity with TAP. A conserved distance between N and C terminus residues of the studied peptides in the transport tunnel were reported. Furthermore, by adversely interacting with the TAP transport passage or affecting NBD domains tilt movement, the viral proteins and cancer-derived mutations in TAP1-TAP2 may induce allosteric effects in TAP that block conformation of the tunnel (closed towards ER lumen). Interestingly, some cancer-associated mutations (e.g. TAP1R372Q and TAP2R373H) can specifically interfere with selective transport channels (i.e. for longer-peptides). These results provide a model for how viruses and cancer-associated mutations targeting TAP interfaces can affect MHC-I antigen presentation, and how the IFN-γ pathway alters MHC-I antigen presentation via the kinetics of peptide transport.

Movies describes the wild-type TAP1-TAP2 transporters allows the peptide passages through the channel, whereas the mutated TAP complex may hinder the peptide transport process.

A recently published article in Nature Methods entitled „The emerging landscape of single-molecule protein sequencing technologies” jointly led by researchers including dr Javier Alfaro from the ICCVS, University of Gdansk and dr Adam Pomorski from the University of Wrocław, was developed in cooperation with scientists from around the world including significant contributions by dr Umesh Kalathiya, MSc Georges Bedran and prof. David Goodlett from ICCVS. Its aim is to describe the technologies developed for studying proteins at the level of a single molecule, which would enable the determination of the proteome at the level of one cell.

Single-cell sequencing methods are a new technology that allows us to study individual cells within a tissue. In cancer this is helping us to understand why tumours sometimes cannot be treated. While genomes (DNA) and transcriptomes (RNA) can be explored at the single-cell level, single-cell profiling of proteomes (proteins) has been very difficult. Since proteins carry out many of the most important activities in the cell, this gap in technology is greatly limiting our understanding of tissue biology.

These up and coming sequencing techniques could one day sequence the proteomes of single cells, or lead to new highly sensitive diagnostics. Generally, the techniques involve protein extraction, followed by some sample preparation specific to a diversity of technologies. Each technologies identifies a protein in a different way as described in the figure.

“Proteomics is currently dominated by mass-spectrometry technologies” – says dr Javier Alfaro from the International Center for Cancer Vaccine Science in Gdansk. These technologies are expensive and sequence proteins poorly in complex mixtures. “We do not sequence every amino-acid in the sequence as we do in DNA in these complex mixtures” – says dr Alfaro. The field is really waiting for a transformative wave of technologies similar to what hit the DNA sequencing world – but applied to proteins. “The problem is that unlike DNA, there is no way to amplify proteins – and this poses a big challenge to the sensitivity of current instrumentation” – adds dr Alfaro.

Proteomics awaits a similar transformative wave of protein-sequencing techniques that will allow for the examination of proteins at the single-cell and ultimately single-molecule levels, even with low-abundant proteins. Such techniques would allow routine proteome profiling, like today’s single-cell RNA sequencing studies, creating opportunities for single-cell proteomics and potentially permitting real-time testing for on-site medical diagnostics and disease screening.

“These new technologies depend on new chemistries and biological reporters that allow us to fluorescently detect not only specific amino acids in proteins, but also their modifications” – says dr Adam Pomorski from the University of Wrocław.

During the writing of the work, a blossoming world of biophysicists, technologists, clinicians and computational researchers was invited to share their perspectives as equal contributors.  “In this day and age, we are all masters of our own specific fields. Bringing people together as equals so that their full energy and diverse perspectives can be combined is essential to break barriers and bring about scientific insight” – says dr Javier Alfaro.

Coronavirus disease 2019 (Covid-19) is an infectious disease caused by severe acute respiratory syndrome coronavirus 2 (SARS-CoV-2). The 2019-2020 coronavirus outbreak, declared a pandemic by the World Health Organisation on 11 March 2020, caused multiple deaths and changed the way we live and work. There is a huge ongoing international effort to contain the disease and to find effective medications. Many Polish clinicians and scientists are on the front line of the Covid-19-related developments by helping patients in hospital words, performing diagnostic testing, providing advice to policy makers and doing valuable research that could speed up development of effective vaccines and therapeutics.

A recent example of Covid-19-centred research contribution from our investigators is a study titled “Highly conserved homotrimer cavity formed by the SARS-CoV-2 spike glycoprotein: a novel binding site”, which has been published in the Journal of Clinical Medicine. This collaborative work has emerged from the International Centre for Cancer Vaccine Science , a joint research unit developed between the University of Gdansk in Poland and the University of Edinburgh co-financed by the Foundation for Polish Science and the European Union Regional Development Fund.  The SARS-CoV-2 spike protein plays an important role in the life cycle of the virus by binding to angiotensin converting enzyme-2 (ACE2) receptor on host cells (facilitating entry into the host cell.  The team measured spike protein variability derived from 791 viral genomes and studied its properties by molecular dynamics simulation. The molecular docking data revealed  a previously unidentified cavity formed by trimerization of the Spike protein that could accommodate macrolide antibiotics such as Rapamycin.  The finding of a novel “druggable” site on the Spike protein protein will assist in future drug discovery programs aimed at targeting the coronavirus (CoV) family of viruses using macrocyclic immunomodulatory compounds.  This collaboration reinforces the value that the International Research Agenda Programme of the FNP and the Gdańsk University  place on working with our international colleagues and emphasizes the need to develop ever stronger international research ties to tackle emerging global health problems. 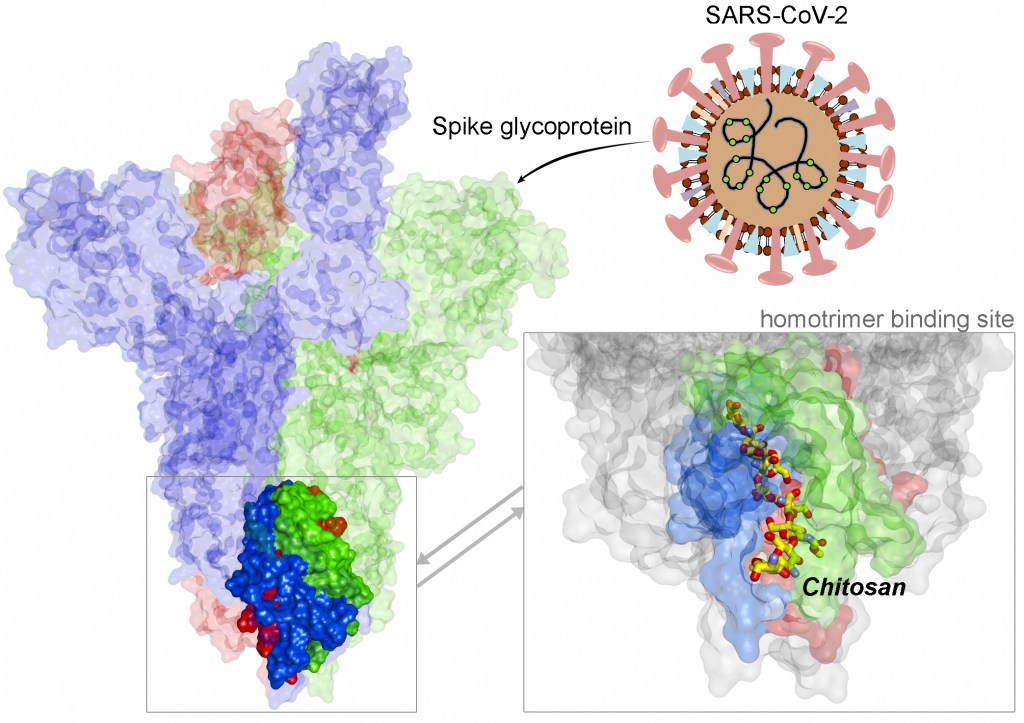